The number of figures necessary for specifying the position of a point is called the dimension of the space.

For a two dimensional space it is sufficient to use two numbers (x, y) : one specifying the position on a right ot left scale and the other number giving the position on the up- and down scale. (x,y) are often referred to as the cartesian coordinates of a point.

Alternatively one can use polar coordinates where one uses the angle between an arrow pointing at the point and the length of the arrow (r, φ).

An alternative is the spherical-polar coordinates involving the radius, the azimuthal angle (φ) and the the declination (θ). 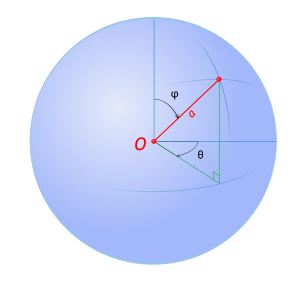